Why do things always look better on the model?!

After spending days sitting in front of my computer attempting to get through some of this uni work, I got slightly over excited when the delivery man arrived at the door. Ok, I got very over excited... safe to say the delivery man thought I was a bit of loony! But then he's probably not that far off...

I have an excuse. I have been looking for a dress like this for AGES. They had similar ones in Topshop last year, but when I went to buy it they were completely sold out. And "might" be getting some back in. They didn't.

So since then I have been raking the shops for something similar. I eventually found this one on Miss Guided. Yet, typically, it was out of stock in my size. I got an email last week saying it had come back in, so I rushed onto the website to order it. After a load of problems trying to order it (the new site experiencing "technical issues"), eventually I received the confirmation email.... it was on it's way!

But the saga of the lace dress didn't end there. With all the problems I'd had trying to order it, I should have sensed it just wasn't meant to be! Because when I tried it on, it was far too big and gapey round the top: 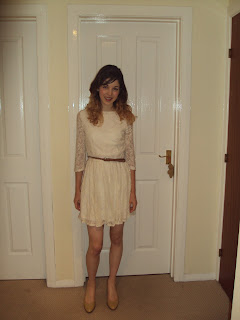 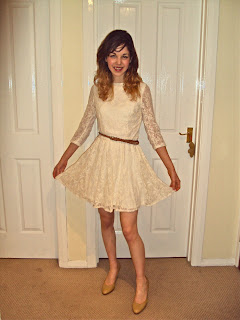 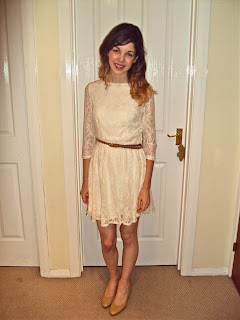 As if sending it back wasn't going to be painful enough, I have to pay the return delivery charge :( It's only £3.50... but still, it just adds to the disappointment! 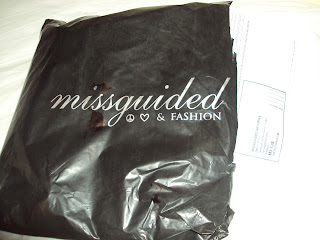 So I'm putting out a plea to all you lovely readers to  ask if you could keep on lookout for a similar one. I'll warn you, I'm very specific in what I want - it has to be cream, lace, fitted around the top, with a kicky skirt at the bottom, that's knee length or above.
Oh, and it has to be available in a small size!!
Somehow I think I may be waiting a while to find one.....
Email Post
Labels: dresses Fashion Posts lace missguided