For three weeks only, join FRAME and Nike Master trainers for this special class in the heart of central london for the ultimate fitness hour working your whole body. Broken into sections concentrating on Cardio, Strength, Toning and Power, you'll get a mash up of Frame and NTC's best moves, set to the backdrop of the ever changing Kings Cross skyline.

Water and breakfast will be provided post workout - what better way to start your day!

Given the description was a little vague I wasn't too sure what to expect - "cardio, strength, toning and power" , doesn't really indicate what you'll be doing! As a Nike collaboration with Frame (one of London's leading fitness studios specialising in Barre classes), I expected the class to be based around my favourite ballet conditioning style moves, but this really was a mixture of everything!

We began the class with what was described as a 'warm up' - but most definately the most intense warm-up I've ever come across - with the instructor literally pinging himself around the stage and expecting us to follow.


Next went on to the cardio, where we combined everything from running on the spot, to burpees, to insane combinations of press-ups leading into squat jumps high into the air.

Going on to the next instructor, we  were all told to grab a partner for a combi workout. Admittedly, I wasn't so keen on teaming up and getting sweaty with someone I've never even met before, but it actually turned out really good fun. Propped up in a side plank position, back to back, we performed ab rotations reaching round to high five each other in the middle, followed by single leg piston squats, holding onto each other hands for support. A few more '2 in 1's' before we finished facing each other for deep squats to the ground, followed by a jump in the air and a hand slap.

Third and final round, the next instructor was all about resistance bands for an upper body blast, consisting of bent over rows, standing bicep curls, tricep curls and delt flys. What killed me, however, was the lateral raises- how the instructors managed to lift the band so seemingly effortless still astonishes me!

When you train with Nike, you expect you're going to receive an intense workout, and this was no different. In a good way though - with the music blaring and everyone getting really into it, you (almost) didn't even realise you were working out!

I have to say, it was the instructors who really made this class what it is! Even at 7AM, they were so enthusiastic that their energy really transferred into the crowd - myself included, which was a welcome pick me up at that time in the morning. Despite a super intense session, we all left buzzing on a complete endorphin high. A perfect start to the day.

With the class being held in an open outdoor space near Kings Cross, you wouldn't expect much in the way of amenities. However, not only were there toilets, a space to change, and cloakrooms to safely store your bags, but there was also a fully fledged breakfast bar on site, courtesy of Pip & Nut. The perfect end to a tough workout, we were treated to toast topped with fresh fruit and deliciously nutritious natural nut butter. Offered a choice of peanut, almond, or coconut almond butter, I went for the latter - and was not disappointed with my choice! 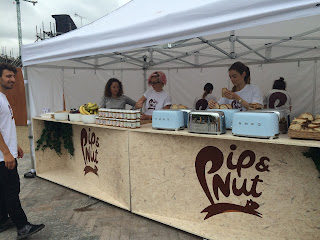 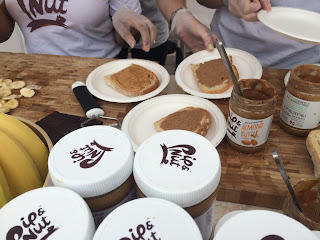 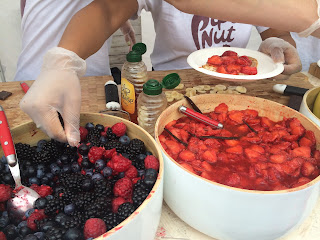 By now, you're probably used to me trying to convince you that a £20 hour long class really is good value for money, but don't worry, I don't need to do that here. This class = 100% FREE!

Would I go back:

If I could! As much as I would love to return, this class runs on Tuesday mornings for three weeks only. Nonetheless, Frame will be opening a permanent location in Kings Cross come September, so I will without a doubt be back then :-) 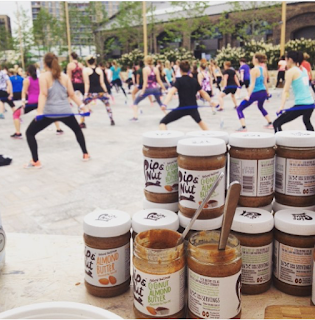