DEFINE by Ashley Yeater is a barre-based workout that incorporates cardio, strength training, and stretching to rapidly transform your body. Start seeing the DEFINE results in as little as 8 sessions. DEFY weight gain by taking control and DEFINE a better body, a better mind, and most importantly DEFINE a better YOU.

Having stalked the amazing Ashley Yeater on Instagram for a few months, I was desperate to her take on my favourite Barre class. So, when I finally signed up to ClassPass and noticed her Wednesday evening class at Mayfair's Danceworks, just down the road from my flat, I signed up in an instant!

Ashley's classes are based around the seemingly simple structure of Barre, Cardio, Stretch, Repeat. I say 'seemingly' simply as, trust me, when you're doing it, it's anything but easy!

A previous dancer on Broadway, starring in musicals including Chicago, The Producers, Gigi, and many more, it was due to an unfortunate jump split injury that Ashley had to bring her dancing career to hault. Unable to continue her previous level of activity whilst in recovery, Ashley used her rehabilitation as an opportunity to recreate her daily physical routines, swapping leaps and bounds for low impact, muscle strengthening alternatives. Define by Ashley Yeater was born.

Beginning with an thigh buster, we used the bar to perform low pulses and plies, with Ashley encouraging each time to get that little bit deeper, hold that squat a little bit lower, pull in those abs a little bit tighter. Only after all our legs had turned to jelly and were actively yet uncontrollably shaking did we resume natural form and have the chance to stretch it out.

"That's what we do in this class. We work it, exhaust it, then stretch it," Ashley informed us, a process we repeated for the remainder of the 45 minute class, working deep into the abductors muscles, glutes, bum (or tousch, as Ashley called it!) abs and core.

I wouldn't say the class was intense in terms of cardio - there was a small section where we were had multiple jumps (or jetés, for any ballet buffs out there), but it wasn't exactly Barry's Bootcamp! 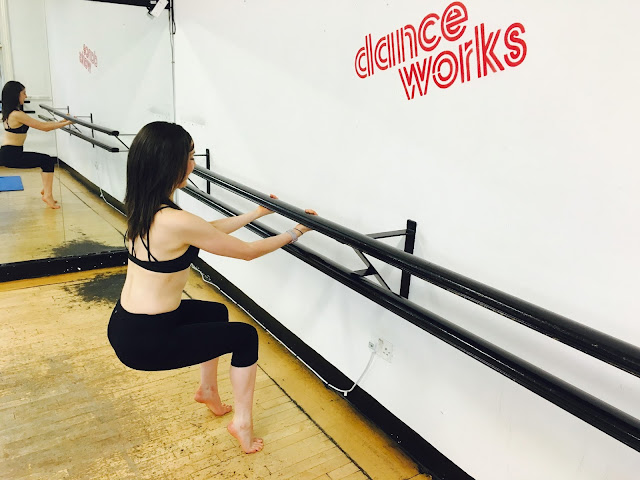 Nonetheless, in terms of muscle burn - Oh My God - it hurt! Because there were lots of small pulses and isometric movements, the class really worked my muscles in a way I wasn't used to. Using low weights yet high reps as the perfect formula for all over muscle tone,  the desired results are long, lean and well balanced bodies. In conjunction with Ashley's infectious bubbly personality keeping you going, you come out feeling worked all over, but amazing for it!

If there was one thing that really made this class stand out, it was the instructor Ashley. Since bringing her Define concept to London from NYC less than a year ago, it's no wonder this girl has already had such success with the launch, now holding her own Define classes in top London studios Phit and The Third Space, in addition to her regular slots at Lorna Jane in Covent Garden and Tuesdays and Wednesdays at Mayfair's infamous dance studio Danceworks. Keep a listen out, this girls world domination is not far away....and she deserves every minute of the success she's experiencing!

With my first experience of Define being at Dance Works, I have to say the amenities weren't quite at a level I'm used. Don't get me wrong, DanceWorks is cool and quirky in a Fame type of way (big beaten up sofas, an old school tuck shop, etc), but if you're looking for luxury hair products in the showers, straighteners, washing bags, the usual - don't expect to find it here.

The toilets are OK, the showers are usable, the studio is large and spacious.... but it's at DanceWorks it's more about the actual class than the aftercare!

Having said that, now that Ashley is also with The Third Space (members only) and Phit (members or drop-in bookings), if it is a great class with a more luxury experience you're after, you know where to head to.

With each class costing  £28, Define is priced at the higher end of London's £20-£30 average, but with individualised attention, all over body workout, fun and enjoyable experience that you receive, you won't be left feeling short changed!

Equally, if that's still a tad out of your budget, Define by Ashley Yeater is also available on ClassPass, where one monthly fee of £110 gives you unlimited access to some of the top studios across London.

Or, why not join Third Space, where you can try out Define alongside hundreds over other specialist classes at one of Londons top luxury gyms. With all these options you've really no excuse!!

Already have done! Whilst I visited once more at DanceWorks, now that Define is featured on the timetable at my gym Third Space (a huge part of me actually renewing my membership there!), it has become a vital part of my weekly schedule. Saturday morning 11.30-12.30 - meet me at the barre!