Are you ready for the biggest training event of they year? Join Team ON Nutrition Members Steve Cook, Shaun Stafford and Lilly Sabri at an exclusive #GOLDSTANDARD experience.

OK, so when I was invited along to the Optimum Nutrition Event down at Ministry Of Sound, with the somewhat ominous description above, I really didn't know what to expect! Nonetheless, with the club and newly turned workout space, Ministry of Fitness, closing their doors to the public for the evening to be taken over by one of the UK's leading Sports Nutrition brands, I had a feeling it was gonna be a good one!

Of course - they didn't call it the workout of the year for nothing! With attendees from all over the country - many had travelled down from Manchester, Bristol, even Newcastle (!) - admittedly it wasn't my usual kinda girl squad, these guys were proper athletes.... meaning we were about to have a proper hardcore workout!

With none of us really knowing what to expect, after a quick introductory talk by ON Nutrition ambassador Steve Cook, alongside a round of Pre-Workout drinks, the doors to the dark corridor soon opened, as an excited tribe ran down the unknown alleyway to be unleashed into our studio...

Beginning with a cardio warmup on the main floor, ON Nutrition trainer Steve Cook taking us through our paces as he jumped about on the bar top of the infamous club. High energy, music blaring and lights flashing, we were separated into two groups before being instructed down separate corridors to begin our 'first' workout.....

First workout?! There was more than one?!

Too right there was! For my group, it was Team Lilly, as we went through her pilates inspired core based routine. But when I say pilates, don't think we were lying on the floor chilling - there's a reason this girls has the abs she does!!

With plank jacks, squat thrusts, toe taps, side planks, pulses ... you name it.... Lilly made sure none of us were getting off lightly! Especially the big muscle building guys - I LOVE seeing them BURN when it comes to the little 'girly' exercises they think they're too strong to bother with!

LOVE IT, girl power at it's finest! What about the next session, continue to smash it?!

OK, so I admit, the guys picked up the slack a little more in round two, as we moved to the designated fitness studio for a heavy lifting circuit style session.. 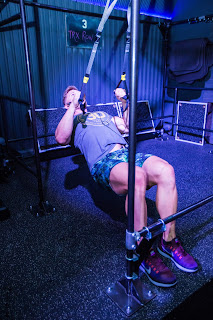 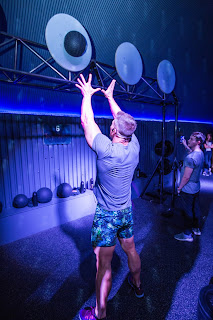 Although it was more of a guy orientated room, this workout one was my favourite! With the class being held in what was previously the clubs 'hidden booze vault', the space was recently converted into a fully equipped training studio, and is where the club holds the 'Ministry does Fitness' classes.

After a quick walk through our circuit session, including TRX rows, ball slams, treadmill sprints, battle ropes, and bicep curls at 'The Guns' station, we were straight back into our session. One minute on, fifteen seconds off, two rounds round each circuit.... it was sure as hell tough, but also  SO much fun!

Sounds an intense way to spend a Tuesday night!?

Yep, you said it!! Ending the night on a high, we were chased back into the main bar area to stretch it all out as the instructors took us through what was partly a relaxed cool down/ partly an insane clubbing rave as we partied out the achy muscles to the DJ's tracks.

Grabbing one of the ON Nutrition shakes on the way out, whilst nibbling on a delicious healthy spread of meat skewers and salad boxes, we were well on our way to making sure those hard earned muscles were fully recovered.... 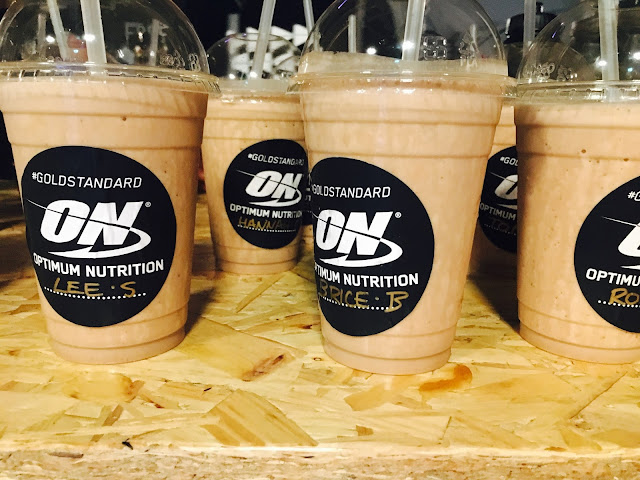 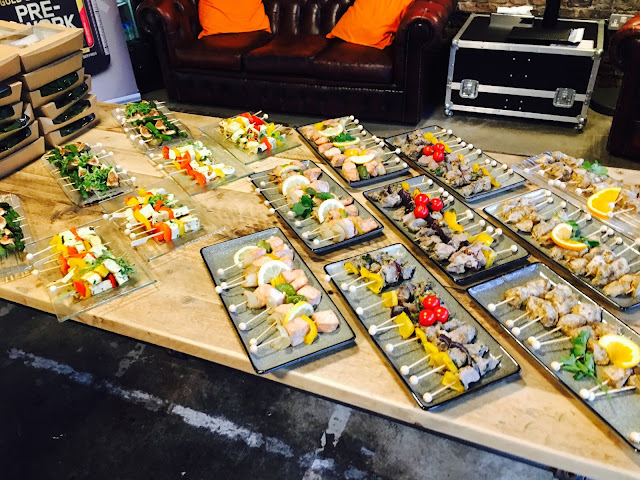 And, just incase that wasn't quite enough (we did work/party EXTRA hard after all!), we also received goody bags stacked full of Optimum Nutrition goodies. Needless to say it didn't take me long before digging into the Lean Double Chocolate Brownie Bar - YUM!

All in all, a HUGE thanks to Optimum Nutrition, Mongoose PR, Ministry of Sound, and everyone else involved, for an epic evening of fun, fitness and fuel!