When Tezenis, world renowned Italian lingerie brand, bring together a brand new collection of trend-led activewear, what what better way to launch it into the market than with a fitness blogger event held at their Oxford St flagship store?

No better way, which is why it's exactly what they did!

As we entered the Oxford St flagship on Wednesday evening, we were taken up to the top floor where the class was going to be held. An amazing space right on the corner of Oxford Circus, overlooking the whole of Central London, you couldn't have asked for a better venue to build up a sweat.

With the evening consisting of a Total Body class, being held by the beautiful Chiara aka 4fitnessake, Tezenis made sure we were all looking the part by inviting us to select an outfit from their brand new fitness collection.

Recognising the ever increasing number of women seeing fitness as part of their everyday lifestyle, Tezenis have chosen to meet these women's requirements by offering a new sportswear line full of attractive yet functionable pieces.

The only difficulty was choosing which outfit to go for - even for an activewear addict, the choice was unreal! Sports bras in floral designs that were wearable and covetable, offering a new take on an urban uniform, whilst the floral body was a real eye-catching piece... albeit a bit bold for me! Nonetheless, with other essentials including hoodies, sweatshirts, leggings and joggers, all in a colour palette of dark pink, black and grey, the collection was perfectly on trend for the upcoming Fall Winter 17 season.

Me being me, however, I can never resist a girly pink, so as soon as I spotted the pastel printed set in feminine pink tones, I couldn't resist!

Turns out, I wasn't the only one - it was by far the most popular choice amongst the crew. As we emerged all kitted out in our new gear, it was time to put it to the test with Chiara's signature Total Body workout.

And boy, did we put those outfits to the test - they don't call it Total Body for nothing! For a full forty-five minutes, Chiara took us through a series of tracks combining cardio and resistance for that head to toe blast. What I particularly love about Chiara's Total Body classes are the challenge on both the body and the mind; with her background in dance, each track is choreographed to the beat of the music, testing your strength, memory and co-ordination!

That doesn't mean to say you have to be a graceful dancer to benefit from the class though - when I did my very first class I had no co-ordination whatsoever, but it's amazing to see how after just a few sessions you begin to pick up the routine. And even if you don't - don't worry! As Chiara stresses in every class, it's all about having fun and building up a sweat.

Which is exactly what we did! High intensity cardio tracks with squat jumps, skaters and kickboxing moves testing tested the support of the sports bra (surprisingly strong, despite not having any uncomfortable under-wiring), whilst when it came to the lower body section, with lots of pulsing, lunging and planking, I was extremely glad of the leggings special high waist feature.... the invite failed to mention I'd be working out alongside a group of fitness models!

And if it's good enough for them, it's good enough for me! Genuinely though, as an activewear addict owning something from pretty much every sports brand out there, I was very impressed with the collection from Tezenis - particularly with the incredibly accessible price points - bras at £10.99 and leggings at £16.99 is insane! Affordable, comfortable, functional but equally fashionable, this is a collection you can easily wear both out in the street and in the gym- meaning  you've no excuse for skipping that workout!

Tempted? The collection can be bought online at https://uk.tezenis.com or at the Oxford St flagship store... just don't blame me if you end up coming out with every single piece - I did warn you!

Huge thanks to the team at Tezenis for hosting the event, Chiara for the hardcore workout, Dominic for the photography, and all the girls above for being awesome company! 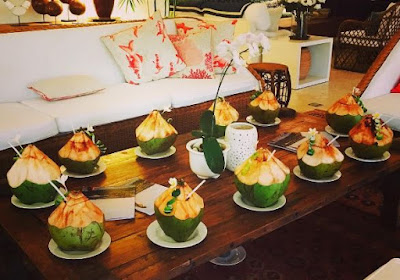