If you haven’t yet heard The Ned in London, it's time to get it on your radar! A private members club renovated from an old abandoned Bank in the financial district, when Nick Jones, owner of Soho House Group took over the site in 2012, he set out to make it as spectacular as the other 18 Soho House & Co clubs. Needless to say, his attempts were a huge success, resulting in one of London’s finest venues; encompassing everything from hotel rooms and suites, 10 different restaurants, a spa, barber shop, nail salon and fully equipped gym. But this time, I wasn’t there to sweat. No, I was there to do my other favourite thing – EAT.


Entering the prestigious building last Sunday afternoon at 3pm, we were greeted  not only by a waitress at the door, but an incredible interior and live jazz band in the middle of the floor. It was confirmed, this was no usual Sunday brunch! Checking us in on the I-Pad, she showed us to our seats, poured us each a glass of prosecco and explained how The Ned Sunday Feasts work….

Put simply, it is literally grab a plate, and eat as much as you wish! Now, I know what you’re thinking – ‘all you can eat’ buffet sounds a bit more Brewers Fayre than upmarket members club right? And you’d be forgiven for thinking so, but I can assure you – the food served at Millies Lounge Sunday Feast is certainly NOT your standard all you can eat buffet!!

Everything from lobster and oysters, to typical scrambled egg and sausage 'breakfast'  style dishes, to roasts, salads and a full dessert trolley, the food is served across all three spaces- Millie’s Lounge, The Nickel Bar and Lutyens Grill. Don't be fooled, there may be a lot of space, but that doesn't mean it's easy to get a table-  I booked ours back in 2017! 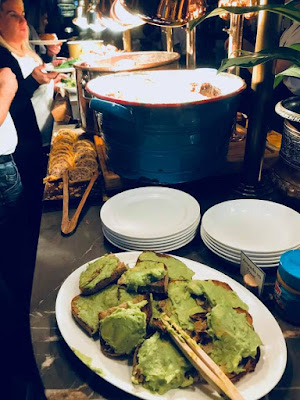 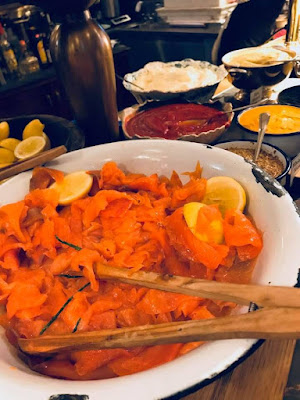 Cause is it even a brunch without avo on toast and salmon?

Going up the bar, needless to say it was a bit overwhelming at just how much choice there was. First up I decided to go for more of a ‘cold’ starter type dish – loading my plate with a selection of their delicious salads  0 the roasted beetroot and feta was incredible - alongside a seafood selection of tiger prawns, smoked salmon, and of course – the lobster!

Feeling pretty proud on myself for putting together a somewhat complimentary plate and not just diving into everything, I then spotted some of the more 'breakfast' style dishes. Granola, pancakes, avocado on toast, eggs, beans, and a delicious fresh pot of kedgeree, I sneaked a little bit of the latter onto my plate also. I figured it kind of fitted with the whole seafood vibe I had going on!

Next up, it was onto the mains, where I had probably the most beige dish I’ve ever eaten in my adult life! Whilst I’m not a huge ‘roast’ fan (I know, criminal right?!), I almost felt as though you couldn’t NOT try it out  - and the best part of it being a buffet style is you can have as little or as much of something as you like. 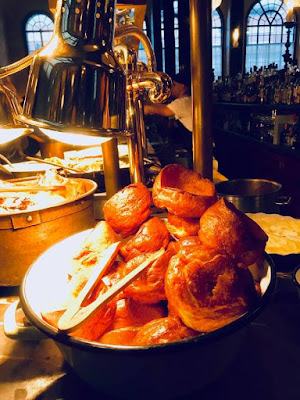 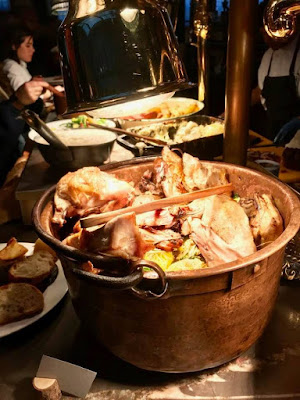 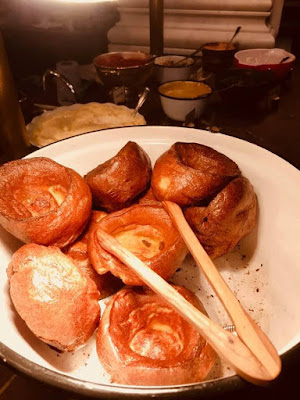 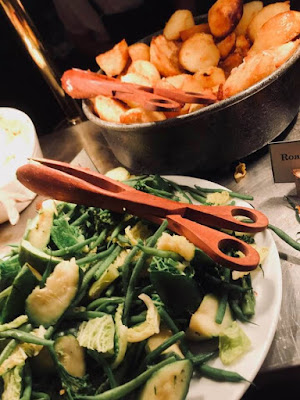 If you want yorkshire puddings as big as your head.... get to the NED!

So once again I loaded up my plate with all my favourite things – roast chicken breast, the most perfectly crispy roast potato and roast vegetables I have ever had, some additional sides from the salad counter (because it was definitely worth a revisit) and, just because it looked so bloody good, a slice of the most incredible sausage roll I've ever had (yep, it even topped Ginger Pig's - if you know, you know). Perfectly flaky pastry, a soft but meaty centre, I’ll never be able to go cocktail style ever ever again.


Finally (well, almost finally), since it was my favourite, and I HAD just completed a very tough Barry’s Bootcamp (I kept telling myself to justify the blatant overeating!), I took myself back up for plate number three – basically combining the highlights from the first two dishes - butternut squash, more kedgeree, roasted beetroot, prawns and one final lobster tail - it was just too good not to!

Finishing it off, much to the amaze of those at my table, there was then the  dessert cart calling. Loaded with an insane selection of pastries, fruit, chocolate ganache, brownies, pineapple upside down cake, almond sponge, even Maltesers and jelly baby’s – of course I couldn’t NOT try it out. Now, given I'm off chocolate for lent (probably just aswell!), I stuck to the pear pastry slice, cappuccino sponge, and a red velvet cake pop.

Now, don’t get me wrong, they were good…. however I don't think they quite lived up to the incredible mains. The pear pastry was maybe a little bland in taste, the cappuccino sponge felt a little dry….. as a major sweet tooth, I'm not usually one to complain about ANY dessert, but oddly enough these ones didn't quite do it for me.


So overall, what were my thoughts? Honestly? Despite the rave review, I do have somewhat mixed feelings! As I say, whilst the experience wasn’t in the slightest bit comparable to a traditional ‘all you can eat’ restaurant, it did still have that slight ‘food frenzy’ feel to it – people almost pushing you out the way of the busy roast potato pot to ensure they get their feed! Of course, this was somewhat offset by the somewhat magnificent building, amazing jazz band playing in the centre, and much more ‘upmarket’ selection of delicious food (ignoring the desserts) – but I don’t know, I left feeling as though I’d eaten far too much or what ended up being a pretty random selection of food (as much as I tried to have my plates ‘make sense’!).

So, would I say it’s the be all and end all of Sunday brunches? Probably not. For £45 a head, you do get your moneys worth (provided you go hungry!), but honestly – part of me would probably prefer to spend that on a lovely cooked brunch, brought to your table, in portioned sizes, put together by a specialist chef who understands the basics of ‘complimentary’ tastes. As opposed to me piling everything that looks good onto a plate (4 times over).


Don't get me wrong, I did enjoy it, and I would 100% still go back - particularly for a more special occasion (it’s definitely still a ‘treat’ and not something you’d do every weekend). Plus, now I know not to worry about having to save room for dessert, I know how to maximize my plates when I do return!!

Who’s it for:  Anyone who’s after a more special meal in elegant surroundings. Or anyone who is just really hungry.


How much:  £45 per head, includes all you can eat food and a glass of prosecco


Where it is: The Ned, Bank