But what does a girl wear during a hurricane?!

Major apologies for my lack of recent posting - however I happened to be stranded in New York!

We went there for a weeks holiday, but the night we were due to fly back (Saturday) was the same night all the airports closed due to Hurricane Irene. So we were delayed by 4 days. Usually I would be delighted to have 4 days added onto my holiday - but it was a bit of a nightmare to say the least!

I'd spent the last of my money on a MAC makeup blowout - all of which had to be returned so I could actually afford to eat :-( We'd pretty much crammed everything we wanted to do into the previous 7 days, and everything in New York completely shut down over the weekend - even Starbucks and McDonalds in Time Sq were closed! And then our flight back was another saga - after being delayed, we were told the flight had been overbooked, and were put on standby for a later one. 10 minutes before that flight was due to take off, I was the only without a seat on it. After it looked like I'd be staying in New York by myself, someone very kindly gave up their seat, and I ran onto the plane just as it was about to take off. Stressful, to say the least! 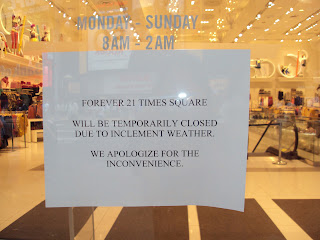 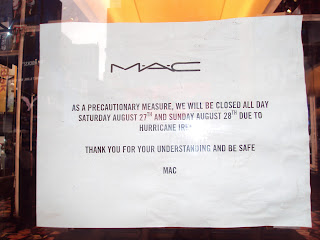 So with all the mayhem over this hurricane- I was expecting something pretty spectacular - hot dog vendors and cats flying through the sky maybe. But I was slightly disappointed in its efforts - it was more like a windy day in Scotland! I know it effected other areas pretty badly, but New York seemed to miss the worst of it.

Anyway, as this is blog is meant to be about fashion (not me ranting about weather and airline delays!), I'll get back to the point! With a windy day predicted, I wanted to make the most of the outfit opportunity.

I'd bought this skirt from a lovely wee boutique called Pinkyotto on Bleeker Street. The street was one of my favourites in New York - it was home to lots of luxury brand designers, but they were housed in small boutique-like shops - much more intimate and less pretentious than the big, grand stores down 5th Avenue (although, admittedly, I did love those too!).

The skirt was 70% off, reduced from $250 to $75 (just over £45). I love the bright blue colour to it, and the light material that meant it flowed gently in the wind. I'm wearing it here on Times Square - on the day the hurricane hit. As you can see, it's a bit windy, but nothing too catastrophic!! Times Square is unusually empty though - especially for a Saturday afternoon. 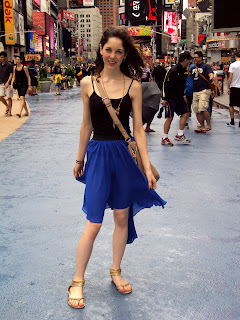 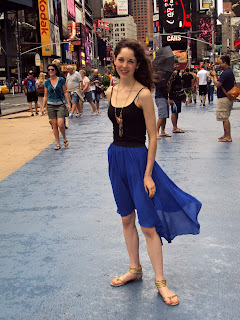 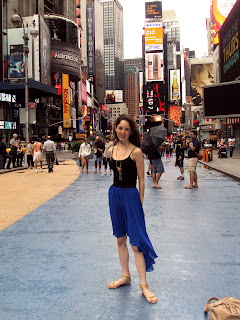 I'll wear the skirt with my orange T-shirt too - it would work well for colour blocking. I could also wear it with just a simple black vest for a night out, with some wedges and chunky jewellery to glam it up a bit.

I'll post up more of my purchases and holidays pics soon - I'm waiting on my flatmate to upload her pictures to facebook so i can steal them :P Hint, hint Ciara!