Where to eat in London.... Vapiano!

Next up in my list of  must-visit places to eat in London is Vapiano - a global chain that began in Germany, now with three restaurants throughout London city.  Unlike other chain restaurants, the great thing about Vapaino is that they make absolutely everything inhouse daily - pasta, bread, sauces and desserts - everything!  With an extensive Italian menu of pizzas, pastas and salads, all made fresh right in front you and tailored exactly to your specification, this was one I had to try!

As we walked into the Oxford Street branch, we were greeted at the welcome desk, where we were handed our Vapiano chip cards and told how concept behind how the restaurant works. Simply visit one of the 'cooking stations' (pasta, pizza or salad) and place your order with the chef, who then loads the value onto the chip card, you take your food and sit wherever you like, and tuck in!

After taking a look at the menu, I joined the pasta queue, and soon placed my order with the friendly chef. It was tough choice, but eventually I decided on the Scampi - King prawns, tomatoes, spring onions, and a squeeze of lemon in a sweet tomato sauce. After asking me if I'd like garlic or chilli (no to both - smelly and too spicy), I was then asked if I'd like any additions (I requested some fresh spinach mixed through the sauce), before choosing which of their 13 types of pasta I would like it served with.

From spaghetti and fusilli, to campanelle and papardelle, it was the spelt pasta that caught my eye.  Higher in fibre, protein and vitamins than normal pasta, I love the more al-dente texture of spelt, however very rarely have I ever seen it on a restaurant menu. And turns out it's one of Vapiano's best sellers- if only more restaurants knew! The chef opened one of the little bags sitting behind the cooking station and popped it into the pan to cook, then a few minutes later added to the prawn and sauce mix.  A couple leaves of basil, a squeeze of lemon, salad and bread for the side, and I was good to go!

Joe, on the other hand, was keen to try the pizzas. Going for the American Pepperoni classic, the chefs began with stretching out the pizza dough, which they make from scratch every day using fresh yeast, fine flour, water, a bit of vegetable oil and a pinch of sugar and salt. Next, it was decorated with  salami, mozerella, and a squeeze of tomato sauce, before being popped into the traditional stone oven.


Taking it back to our table, to see a lovely bottle of the house white wine sitting waiting for us, it was finally time to dig in!


Both dishes were absolutely lovely. I was feeling rather smug with my tasty dish - with  the pasta cooked just to the right texture, the king prawns lovely and juicy, and the perfect amount of sauce - yet Joe was feeling equally as smug with his pizza! Which, I must admit, also tasted pretty good (I did manage to blag a slice!). The side salad was a nice addition for some crisp and refreshing veg and, although I can usually give or take bread, this one was most definitely one to take... especially when drizzled with the authentic Italian olive oil and balsamic vinegar on the tables. Despite the very generous portion sizes, the food was so good that we couldn't help but clear our plates!

Finally, to the deserts - a menu too tempting to skip. Whilst Joe went for the Tirimisu Della Casa (a traditional Italian dessert of coffee and liqueurs blended with marscapone, cream and cocoa), it was the Nuvoletta Dolce (Fresh yoghurt and sweet raspberries covered in crunch meringue) that caught my eye. And I think I made the right choice, as it arrived double the size of Joe's! Whoops... but I wasn't sorry.... and  turns out it was far too tasty for sharing!

Best Part: The unique ordering system. It's like having your own personal chef, standing right in front of you cooking to your specifications. It also overcomes the 'behind the scenes' scares.... I've heard scary stories as to what happens to your food behind kitchen doors!

Worst Part: It can be slightly annoying that everyone ends up getting their food at slightly different times. As the queue for pasta was quite a bit longer than the one for pizza, Joe had to patiently wait until I'd returned with my dish. Given I'm such a slow eater we'd have been fine if it was the other way around - I'd of gotten a good head start :)

Price: Amazing value for money! I guess because they don't have to pay for table service the company saves on costs - and whilst most companies would gobble that up into increased margins, Vapiano seem to really reflect that with their fantastic prices. With pizzas and pastas beginning at £6.95, for freshly handmade authentic Italian, it makes you wonder why anyone would go to Pizza Hut ever again....
Best for: A casual dinner or lunch. Because everybody is given a seperate card for their own order, this would make a great place to go if there's a large group - saving that difficult splitting of the bill. (It never seems fair to split it 5 ways when one person went all out and the other only ordered a simple pasta!)

Overall: Fantastic food, great prices, a relaxed atmosphere and a great concept - whether visiting the city or a London local, Vapiano is a must try! And apparently their newest venue at Bank is even nicer....maybe I'll need to visit that one too! 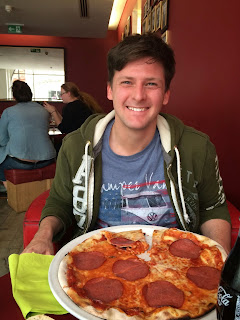 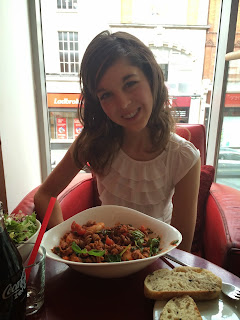