FitMiBody, an independent fitness studio just off Old Street, London, is one I have been meaning to try out for a long time! After keeping hearing rave reviews and seeing awesome images on my Instagram, I finally got round to trying out their 30minute Full Body Circuit Class.

We first began with a thorough warmup, which involved bear crawls, walking lunges and spider climbs up and down the blue ‘runway’. Turns out we needed this thorough workout, because what was about to come was going to be intense… given it was only a 30 min class, we were (quite rightly) launched right into the hardcore session.

The first half of the workout was a mix of cardio and weights work. Splitting the class into two ‘teams’, the first half began on the rowers, where we were to row 50 calories before being allowed to step off the machine!

After that was done, we went straight into full body weight work. Beginning with deadlifts using weighted Kettlebells, we worked in a pyramid structure of 14, 12 then 10 reps, as we moved onto wide leg squats (10 reps) followed by dumbbell shoulder presses (10 reps). Once that round was complete, it was back onto the rowing machine for another 50 calories, before repeating it all again a second and third time. See, I told you it was intense!

By the end, my arms, legs, abs, shoulders - everything!- was burning, but there was no time for resting, as we were straight into the second half of the workout - Battle Ropes and The Prowler Pushing Sled.

You may or may not have tried these pieces of gym equipment before, but I would advise you do!!! I have a bit of a love/hate relationship with them, as the compound resistance really works your muscles in a way no fixed machines can do, but you will feel the burn afterwards (and during!). With the Battle Ropes, we lifted the heavy supersized ropes up to shoulder height, then quickly lowered back to the start before repeating again, so the ropes fell in a double ‘wave-like’ motion. A simple movement, yet one that engages your arms, abs, shoulders and legs all whilst raising your heart-beat. 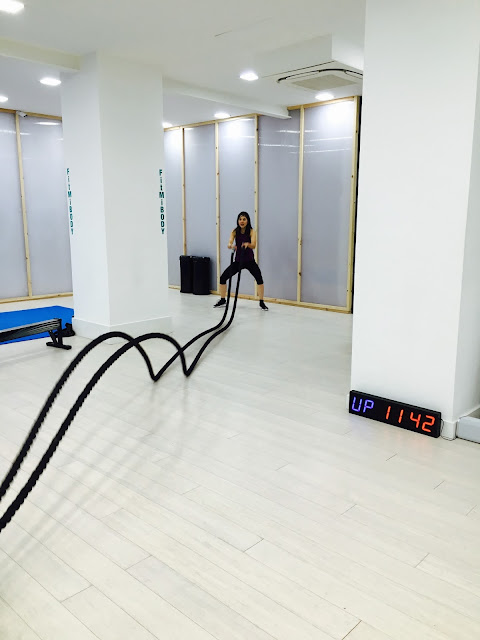 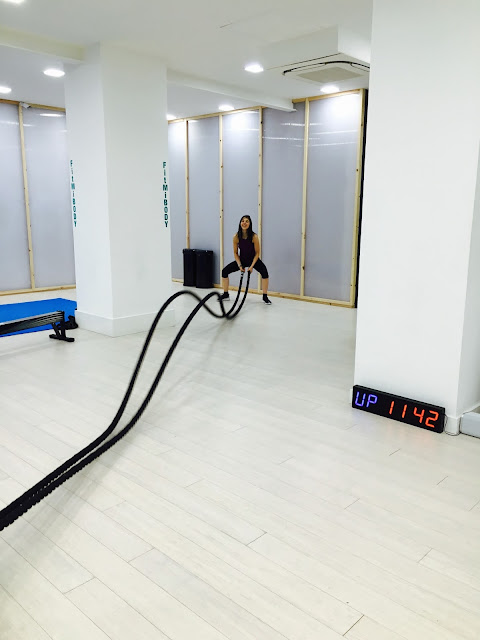 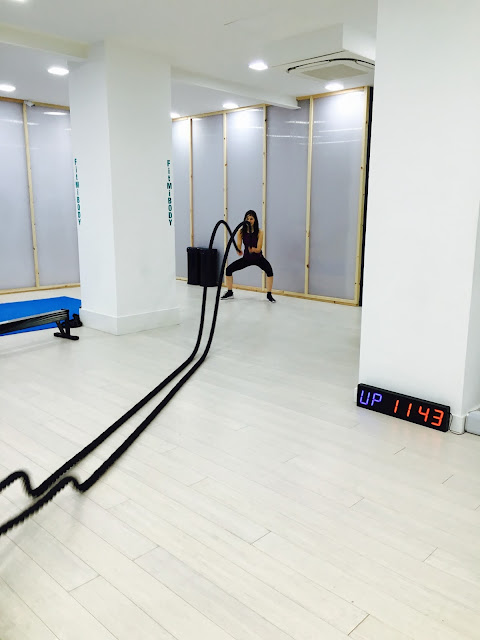 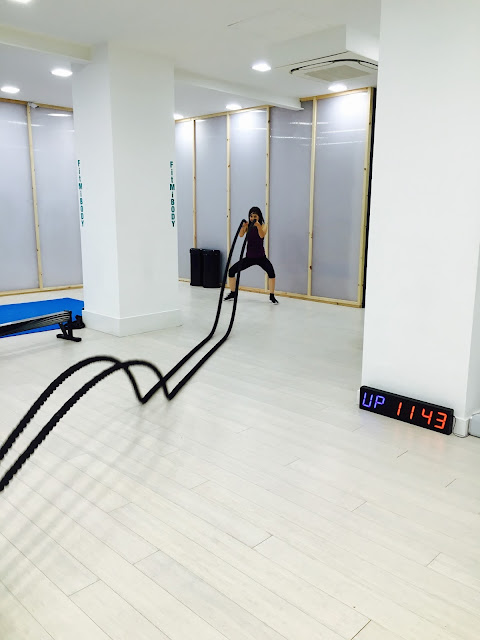 After a minute of Battle Rope Waves, we swapped with our partner and moved onto the Prowler, which we pushed up the blue carpet. Once we reached the top, we had to flip it round the other way, before sprinting all the way back down with it once again. With your arms and legs having to work together to coordinate the movement, keeping a strong core becomes more crucial than ever to keep your body stable, whilst pushing against such resistance whilst attempting to sprint gives you a cardio workout like never before. Strength and endurance!

As a HIT style training session, this was of course going to be intense, and by mixing up intervals of cardio and weights work during the first section of the workout, our hearts were certainly pumping. Not only that, but with the Battle Ropes and Prowler offering a mix of full body strength AND cardio workouts at the same time, this was not the faint hearted! As I was warned before I began, I left aching, but feeling strong!

Our instructor for this session was Jenna, who was friendly and warm, but motivating and hardcore at the same time! With her favourite exercise equipment being Gymnastic Rings, and favourite exercise Power Cleans, she’s clearly not the type to let her students off lightly. But that’s exactly what I want from a trainer… I can do a ‘light’/ ’non’ workout myself… whereas Jenna will push you out of your comfort zone to get the results you went for.

Really could not fault FitMiBody for the fantastic ammentites provided - everything you’d expect and more was provided. Lockers are large and spacious, and the studio provide you with a padlock for free to use them.

Towels are provided to all guests for a post workout shower under the powerful heads, where you are free to use the Cowshed shampoo, conditioner and shower gel.  In the changing rooms, you have hairdryers, straightners, cotton wool and babywipes to remove makeup -  a pre and post workout essential that few other studios think of!

Meanwhile, with fresh water to rehydrate prior to your workout, and a protein shake bar for refuelling afterwards, FitMiBody ticks all the boxes!

A single class at FitMiBody costs £26 which is in the middle for the £20-£30 London average.  However, what makes FitMiBody such good value is that, aside from offering a range of different packages to suit most budgets, the classes they offer are so intimate that it is the perfect balance between an expensive one-on-one PT session, and a budget oversubscribed class whereby the instructor can hardly see you! By offering personal training in a group environment, FitMiBody make expert training accessable for everyone.

Definitely! With different weights based classes focusing on different muscles groups each time (e.g. Core&Hips, Back & Triceps, Shoulders & Legs), the great thing about FitMiBody is that you could visit every day if you really wanted to, without the risk of overworking the same muscles. In addition to that, with more cardio focused classes including Boxing and Speed & Agility, as well as a relaxing Sunday yoga session, there's so much to try!