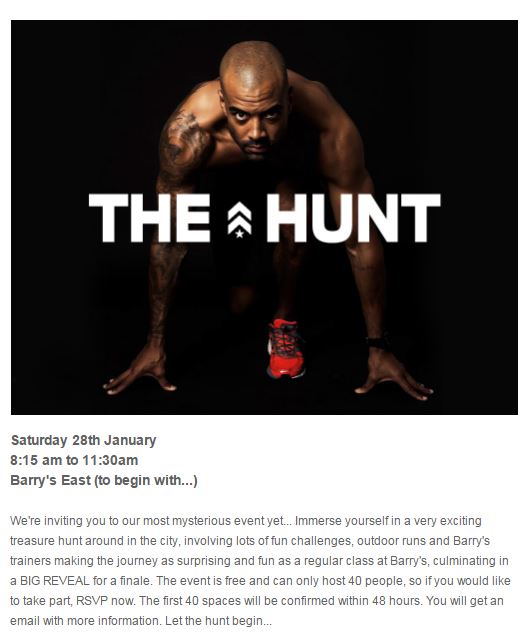 When Barry’s do an event, they do an event well, so when this mysterious email was sent out to thousands of keen Barrier’s (yes, that’s the official Barry’s noun, I’ve decided!!), it’s no surprise the response was overwhelming! So, when I received an email the day before the event saying there was a couple of spaces come up, I jumped at the chance to take part!


To anyone who hasn’t tried Barry’s… where have you been?! OK, so it’s not for the faint hearted. It’s probably London’s most intense class. Ok, definitely London’s most intense class. But if you want a  real hardcore workout and a proper adrenaline/endorphin rush (and why wouldn’t you!?), you and Barry’s are a match made in heaven. Common misconception - Barry's Bootcamp isn't an outdoor military style session. With over 22 studios in the US, alongside international studios in Oslo, Bergen, Fana and Sandvika, Norway, and London, each high-end indoor studio is equipped with state of the treadmills, weights and changing facilities. The Barry’s concept is essentially an intense strength and cardio class combined with a night club party atmosphere, creating a time efficient but highly effective energy fuelled indoor workout.

But now, for the first time, we were getting the chance to take the experience OUTDOORS with the first ever UK Barry’s HUNT!


Gathering at Barry's East at 8.15am (after being out in Soho the night before – bad move!), the forty of us in attendance had no idea what to expect. But there wasn’t much time to ponder, as immediately after changing into our Hunt T-shirts, we were instructed straight downstairs the studio for a ‘warm-up’ blast on the treads and weights on the floor. Warm-up?! The intensity was just a snippet as to what was to come!

“Go, go, go!!” the instructors shouted as they chased us out the studio onto the streets of London, where we began round 1 of our hunt. With instructors Jemma, Anya, Connor, Jay, Hannah and Ollie all on board to push us (I mean encourage us!) on our way, we began our journey….


Kicking off in Finsbury Sq, the instructors took us for a second bootcamp style warm up. Toe taps, squat jumps, planks, sprints, and a LOT of rolling in the mud, then we were on our way once again running through the streets of East London. Working our way down to Holburn, we picked up the pace up to Euston Road, sprinting towards the second pitstop outside Kings Cross Station….

As we got started on a ‘lower body’ series of squat jumps and lunges outside the station, all of sudden we were saved by the bell when the security guard approached us.... subsequently chasing us away. Trespassing? Surely Kings Cross Station is for the public anyway?!

Never mind - there was no stopping this crew, as we got our paces back on and made a short sprint to our next stop off – the original, and still my favourite, Barry’s Central!


Swarming into the torture chamber, we took up our place on the state of the art Woodway treadmills, whilst the floor group grabbed their 8-14kg for another Barry’s blast.

Grabbing a bottle of water on the way out, and taking a very quick breather for a group pic outside the studio, we were back on the move. Next stop – Regent’s Park, where it was time for instructor Jemma to let hell loose with all things abs…


Crunches, toe taps, planks, side planks, hip dips, v-sits, bicycle crunches, flutter kicks and Russian twists – after all, you need a strong core for all that running.


“Come on guys, it’s the final push!” the instructors called out to us as we set off our last run – sprints around the outside of Regents Park, where the Barry’s ambassador doggy Crusoe (who had run with us all the way) showed us all how it should be done, pounding his way through the park. 100% the fittest dog alive!

Coming out the park to run down Baker Street (where it was very tempting to pop home for a quick nap!) we finally all conglomerated in the sunshine at the entrance to Hyde Park.


“Well done guys, you did it!” Ollie congratulated us all, as Jay began to take us through some stretches to cool down.


Was this really it? Don’t get me wrong, we had just ran 12.5k in addition to 3.5 Bootcamp sessions (Kings Cross was only a half!) so we were exhausted after what had been an amazing event… but something just didn’t feel quite ‘complete’….


As Ollie continued to act very suspicious, our concerns soon came to fruitition as he suddenly announced “guys, let’s go west!”. Yep, we knew it - suddenly we were back on the run once again.


Trailing through Hyde Park in the bright sunshine, as our legs all began to fail us, it was blatant curiosity/FOMO that began to keep us going…. surely there must be something exciting waiting for us west?!


As we sprinted towards to the finish line at the brand new studio, the celebrations began as the THIRD and newest Barry’s studio was revealed. Even baby Finn (trainer Anya’s son, THE cutest and youngest Barry’s recruit ever!) was there to celebrate! Grabbing a glass of champagne (not baby Finn), we walked down the steps to be the first Barry’s tribe to enter the new studio….

OK, so it was still a bit of a building site! But once complete with their state of the art studios, lighting and changing facilities, Barry’s West will be able to accommodate classes of up to 53 participants. With the Barry’s Fuel Bar also to feature, I can see this becoming my new weekend hang-out spot… a skinny PB protein shake please (that's peanut butter,  almond milk and vanilla whey, minus the banana), extra chunky!


In addition to the fuel bar, the studio will also serve up a range of Munch Fit Food healthy meals, which we go to tuck into on the day as a reward for all our hard efforts. Protein waffles with mango chai see jam? NAILED IT!


The studio is set to open this spring, so keep a look out on my Instagram, as I plan to be one of the first along to give it a shot!