Just incase you hadn't quite noticed.... I enjoy to work out! I enjoy working out most days, doing a variety of different exercises-  from running, to spinning, to boxing, to HIIT, to weight training, TRX, yoga... and just about anything in between! The thing is, more recently I've began to see things slow down in terms of my progress, as my body begins to get used to the workouts I put it through.

So, when I was invited for a week long trial at the brand new F45 Tottenham Court Road, I was intrigued to try something different. An Australian born brand, now with over 450 studios in 18 countries, F45  is a 45 minute workout which combines HIIT, Circuit and Functional training into one challenging class. With the sessions being made up of three different 'pods', and each pod containing four different exercises (so twelve stations total), with varying time spent at each station depending on the class, no workout is ever the same.

Six days, twelve classes, and a hell of a lot of Adidas activewear - here's how the week went down....

OK, so my 7AM Monday morning TRX classes, followed by Sweat X - I'm used to. Yes, it can be a killer getting up at that time of the morning, but as one of my favourite classes with the Monday morning Third Space regulars, it's always a great way to start the week with a bang.

7.30pm F45 classes, however, I'm not so used to! Signing in on the swanky iPads at the Tottenham Court Road location, I made my way down the basement studio, where I saw my fate on the screens ahead....


Yikes! After demonstrating each station, our trainer - and studio owner - Michael kindly explained we'd be spending 45 seconds in each exercise, with 15 seconds to rest/move into the next exercise in that pod. Going round each pod 4 times, making sure we get the most of each exercise before switching to the next 4 rounds of three exercises. To say I was dying by end of those Kettlebell Burpees would be the UNDERSTATEMENT of the century!! I'm not used to THAT many rounds of circuits!

Whilst Callum, instructor for Speed Fiends at Third Space Marylebone, is never one to let us off lightly, today he decided to mix up our Speed Fiends session and spend the full 45 minutes focusing on Sprints. Thanks for that Callum... let's hope F45 tonight DOESN'T involve legs!

Unfortunately, that wasn't gonna happen! Tonight at F45 it was 'Romans' - the class designed to focus on strength, resistance, functional movement.... and legs, it seems! 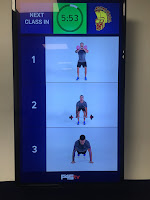 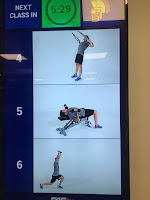 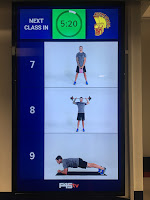 As Amy, PT and co-owner of F45, explained the timings - just 35 seconds work and 25 seconds rest - I sighed a sense of relief, thinking we were being let off lightly. HA, was I wrong! Turns out, Amy and Mike don't accept 'light' work and, with them both working as a team instructing every class together, there really is no hiding in the back! With two sets at each station, and two rounds back-to-back in each pod, EVERY MUSCLE HURT! I slept well that night!

So in Calisthenics at Third Space we work on different 'essential' strength movements for four weeks at a time, allowing enough time to progress onto more advanced levels before moving to a different focus. On week 3 of our press ups and lunge focus, our instructor Andrew was in the mood for pushing us further. Just what I needed after yesterdays Pod 2 chest work!

That said, I was looking forward to another round of  F45 Athletica... and actually quite excited to see what tonight had in store for us: 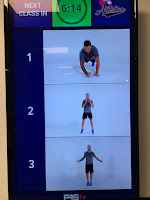 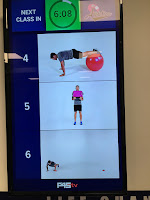 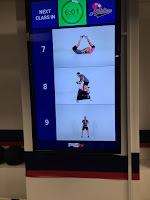 Excited, for that, I hear you question my sanity?! Ha, ok so admittedly the sight of so many Chest Presses wasn't exactly what I was hoping for, but with F45 really building that group training atmosphere by pairing you with your 'workout buddies' in your pod, it really does keep you going. Potentially it may have been my competitive side getting the better of me, but when my partner next to me is slamming out those chest presses full whack, there's no way I'm gonna let myself down!

OK, so today I woke up sore. My alarm went off at 6.20am and the temptation to roll over and go back to sleep but was a little too much. But when I looked over and saw my new Stella Sport gear all laid out waiting to me, suddenly I had a new lease of energy. See, my activewear addiction does pay off!

And by the time it came to Romans, again, I found myself weirdly excited. Tonights class was a little earlier, and less busy.... in fact, it was only females..... and when one girl (only half jokingly) suggested we go for a Spice Girls soundtrack, instructor Amy wasted no time in whacking off the usual F45 radio to replace it with a little bit of Posh and the gang. With girl power in full whack, we got started on our first pod:

THE PROWLER. THE PROWLER. Anyone who has ever worked out with me will know how much I HATE leg exercises. Hate comes with a passion. I'd literally rather do burpees for an hour then anything lower body... so this was my Everest! Finishing the final pod circuit pulling this beast of a machine, with 40kg weights on it just for a little added intensity, and going all out for four sets... THANK GOD Spice Girls were blaring me in the background.... although the lyrics "Stop right now" perhaps weren't the most conducive!  We only stop when the work is done - GIRL POWER!

There's a reason I don't like leg exercises. They burn. Especially the next day. Especially when your sitting on a watt bike at 7am, cleated shoes on, feet securely in the straps so there's no getting away. I'm tired, and a little grouchy. I sneak my resistance down... just a tad.... but somehow still burned a good 100 more calories than I tend to average. Pretty surprised at myself... perhaps this hard work is paying off!?

And then it gets to 6pm, on a Friday night. My friend who was meant to be joining me at F45 tonight has cancelled. It's Paddy's Day.  Everyone else is out celebrating in the pub. The temptation is there, dangling infront of me..... but I've come so far. So I whap out my leggings, put my hair in a pony tail, and tell myself shit is about to go down.

And turns out I was right. Cause on Fridays at F45 London, it's all about Tabata - 20 seconds on, 10 seconds off. Eight rounds at each station: 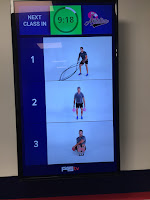 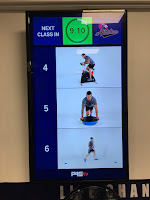 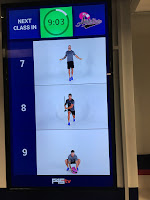 With Tabata training haven't gained increased recognition over the past few years, being proven as a great to way to improve endurance and speed, although there was a mutual groan amongst all of us when the session was announced, as soon as we got into it I could tell why it's so effective. Knowing you have only 20 seconds to complete, even if it is for 8 rounds, the significance of a 10 second break on the horizon cannot be underestimated!

Here it is, the grand finale - Hollywood. Forget the pods, the Hollywood sessions are made up of 27 stations, one minute at each, two rounds through = 54 minutes of high intensity strength, cardio and endurance. 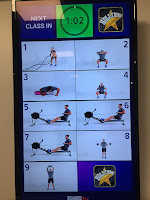 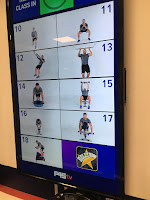 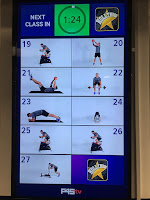 
OK, so as if I didn't love F45 enough already, this class was INSANE!! Fully booked wayyyyyy in advance, it's pretty much the highlight of the F45 week. With 'The Food Medic' Hazel Wallace, and 'Clean Eating Alice' joining in the fun, and a live DJ blasting out hard-hitting beats to power you through each station, it was pretty much like a Saturday morning rave. And an extra sweaty one at that!


And there was definitely no hiding on todays class as, working out on the pod right next to me throughout the class, it was F45 Founder and Athletic Director, Daniel Conn. Yes - the guy in the videos demo-ing the workout! Just touched down in London town, he came straight off the plane from Aus to join in our Saturday session. Respect!

I've got to admit, by the time Saturday came along, I had actually really surprised myself at how the six days had panned out. It's not that I didn't think I wouldn't be able to manage six days of double sessions (if I put my mind to something, I will complete it!), but what I didn't expect was to actually enjoy it just as much as I did. Don't get me wrong, it was tough, and there were times (mostly in the mornings!) when I considered just sacking it, but that's just not in my nature. With the classes at F45 being so genuinely enjoyable, I would actually leave each session already excited for the next one.

What REALLY makes F45 Tottenham Court Road so special though, is the two amazing owners and instructors, Mike and Amy Costello. They arrive at 5AM each morning, and don't leave until after 9pm each night, teaching classes all day, six days a week.... but you can tell they love every minute of it. With their energy and motivation spurring us all along the way, although the work you to the bone, they're genuinely so fun to be around that you come out of each class dying, but buzzing at the same time. Guys, I couldn't have done it without you!

So, overall, I am definitely NOT suggesting we should all be working out twice a day. Aside from being completely unsustainable, long term it isn't beneficial for your mind, body, or sanity. BUT,  if you are looking to ramp up your fitness levels, get in shape for a holiday, or just try something new - I cannot recommend F45 highly enough. 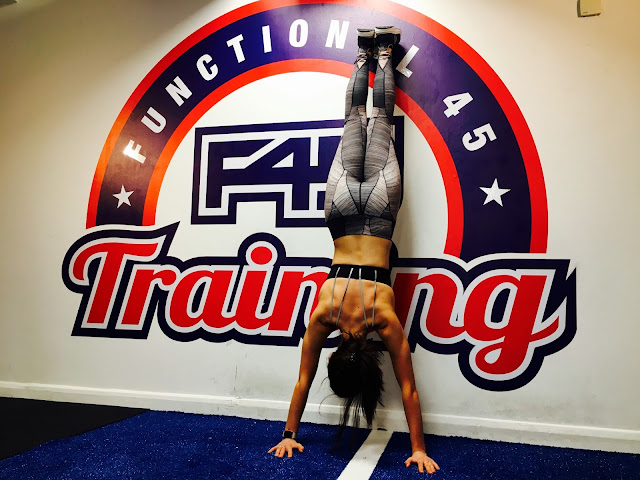 If you needed any more convincing, with the studio currently offering a 7 day trial for just £20, now is the time to sign up to the challenge! Click here to sign up!