Every move effectively combines core, endurance, cardio, balance, strength and flexibility training.
This is the method and machine that has transformed Hollywood’s hottest bodies! The Lagree Fitness Method delivers results fast. The no-impact program features targeted exercises performed at a slow and controlled pace, activating slow twitch muscle fibres to build the long lean physique that has made this workout famous.

Having always pawned off pilates as a 'gentle' form of exercise, Studio Lagree wasn't one that initially appealed to me. If I'm going to for an exercise class I want to be WORKED, not lying on the ground trying to engage my pelvic floor muscles (wherever/whatever they are).

However, after numerous recommendations about Studio Lagree from my trusted London fitness  buddies, I (somewhat reluctantly_ got my pilates socks out to venture up to their studio in City..... and boy, was I in for a shock!

See, Studio Lagree isn't just pilates. It's like pilates on crack. Going up a mountain. Carrying an elephant on your back. On one leg. Ok, you get the point, but seriously - this class burns!

What makes it different from any other pilates classes?

Whilst the class is founded on traditional pilates movements (designed to engage the core, build posture, balance and flexibility, amongst other), it was the founder of the company, Sebastien Lagree, who believed that most pilates classes didn't do enough to develop fundamental elements of strength, cardio and muscular endurance training. 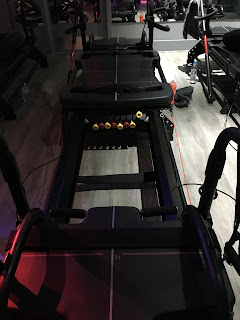 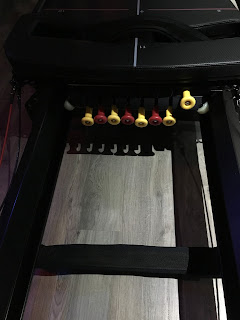 Thus, he invented the now (not-so) secret to Studio Lagrees success- The Megaformer™. Going one step beyond a traditional Pilates reformer, the Megaformer uses adjustable spring-loaded resistance to allow for its users to select a manageable yet challenging level for each exercise. Ensuring clients never reach a plateau, the resistance can be easily increased as strength is built, whilst various accessories including arm straps, handles and poles, mean the challenges appear more or less endless!

Deciding to try out the Full Body class with Matt one Sunday morning, we began the class as most do - with a gentle core warmup. Gentle, ha! At this moment I realised that if two minutes of ab roll outs against spring loaded resistance is classified as 'gentle', I was in for a more intense class than I had imagined!

Unlike a normal pilates class, in Lagree, you will sweat! Encouraging maximum muscle exertion, you'll also shake, pant, develop balance, flexibility, muscle and core stability.  The movements, Matt explained to us before we began, are slow and deliberate, which purposely activates the slow twitch muscle fibres to increase stamina and oxygen capacity of the muscles. And it didn't get easier, as we moved onto the upper body series - swimmer, mega preacher curl, and 'sexy back'. The challenge really comes from the strict tempo and longggggg durations of the hold - ensuring your body goes beyond it's previous capabilities to stimulate change.

So, whilst I am used the high intensity HIIT and strength training, it was these small pulsing movements that really worked my muscles in a way I'd never felt before. With little or no rest in between sets, sessions can burn up to 800 calories, working over 609 different muscles (many of which I didn't even know I had - until the next day!). The Lagree burn they talk about... yep, it's real! 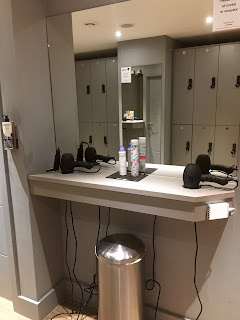 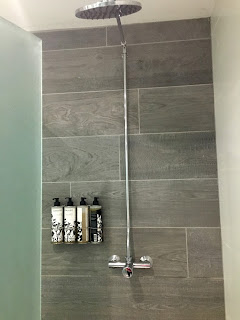 Amenities and changing rooms on point

OK, so firstly, lifting weights will not immediately turn you into the hulk - trust me, if only it was that easy. Females just don't have the hormones (mainly testosterone) to suddenly build bulging biceps and ripped shoulders. Glad we cleared up that point.

Secondly, even if that were the case, for a little bit of science - the Megaformer moves activate the fat burning slow-twitch muscle fibres, which aren't nearly as prone to bulking as the fast-twitch muscle fibres. The result? Long, lean, toned, fat-burning bodies! No wonder Kim Kardashian and Gwyneth Paltrow are super fans!

Lagree has only one studio in the UK, situated in London City. Classes can be purchased online for £30 a class, or £200 a month for unlimited use. Yes, I admit, it's expensive, And it's tough. But who said anything worth having ever came easy?!

See you on the reformer.... the MEGA-reformer!