I don't actually mind winter. Ok, so it's mainly because it means Christmas is around the corner (and I am a HUGE christmas fan!!), but also because I love the idea of crisp, frosty days when you're all snuggled up in a warm jacket and chunky scarf.

But not when it involves RAIN. And of course, being in Aberdeen, we get the pleasure of the wind to accompany it. Hence my outfit choice today - cosy and comfy!! 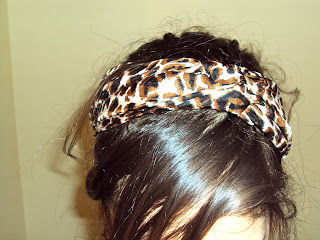 I had the straightners heating up this morning, but then changed my mind as I looked out the window! Knowing it was just going to get frizzy anyway, I popped it into a messy bun and tied this scarf round my head in an attempt to hide the flyaways (I stress the word 'attempt'!).
I got my boots about 4 years ago from Office - they have done me well! I love the wedge heel - giving me some much needed height without killing my feet.
The jumper was from Republic last Christmas. The jumper hangs and swamps me a little bit, so I always wear it with my Topshop belt to give it some shape.
I had near breakdown earlier when I thought I had lost my favourite belt. Pretty pointless story, but I'll tell you anyway! So earlier today, I came out the gym into the changing rooms to get back into my normal clothes. I threw on my jumper and leggings, and went to add the final few accessories... but my belt was nowhere to be seen. My flatmate suggested I had perhaps left it lying in the changing rooms when I got changed first, so I went to reception to ask if it had been handed in. I described it to her - a thin leather waist belt with a dog clip.The receptionist's reply: "Is it a 'small' wallet?".
"No, it's not a wallet, it's a belt."
"Oh, you mean like one of those travel wallets that strap around your middle?" she replied.
"Ehhh, no. It's just a regular belt".
With a puzzled look on her face, she went off to look, and returned a couple minutes later. "We haven't had anything handed in - was there a lot of money in it?"
"No - there was no money - I'm looking for a belt, not a wallet!!!!"
So she went to check again, as I tried to keep my frustration to myself - there was no way I was going to get my belt back if the person looking for it didn't even seem to know what a belt was! Just as I was controlling my anger, I had a rumage in my handbag.....and found my belt in there! Oops! Unsurprisingly, the receptionist came back and told me she couldn't find it at all.
"That's ok," I tried to sound disappointed. "I'll come back later in the week to check if its been handed in then".
I wasn't going to let her know that it was me who was the stupid one!! Watch this space, karma will come back and bite me for it :P
Email Post
Labels: Fashion Posts