Where to Eat in London - Dinner at Pescatori, Mayfair


With my favourite Irish chic Miss Ciara O'donoghue coming to London for a weekend visit, I had to take her somewhere special. And Pescatori, an Italian seafood restaurant, certainly lived up to those standards.... 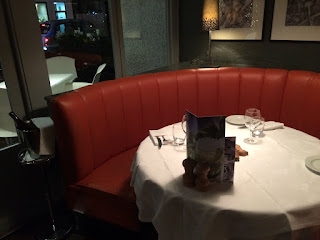 Despite it being a busy Saturday night, we were greeted at the door and promptly shown to our table, in a cosy position right at the front of the restaurant. After order a glass of Red from the delicious wine menu, we tucked into the warm bread and fresh cherry tomatoes from a lovely wooden board in the middle of the table. A lovely touch to set the tone for the rest of the evening.
﻿﻿
﻿ ﻿


To start, we went for two dishes to share. Firstly, the beetroot marinated swordfish carpaccio, which was served with a delicious zesty, but not overpowering, artichoke salad.
For the second dish, we were planning on going for the seared king scallops from the Antipasti Misti section of the menu, but after being informed by our lovely waitress of the daily special starter, king baked scallops with a crumb cheese topping, we went for the latter....which did not disappoint!

The mains were the tricky part - in a good way - there was so much to choose from and, being an absolute seafood lover, I could have gone for anything on the menu. In the end, it was a toss up between the Zuppone di mare, a seafood and shellfish stew served with toasted bread, and the Piatto imperiale - a mixed shellfish platter on ice. Both dishes are designed for two to share, so in the end we made a consecutive decision for the shellfish platter - as much as I'd of loved the try the fish stew, we decided the shellfish platter would be a little more spectacular, and not something we'd usually treat ourselves to.


Left a little speechless when it arrived, it certainly topped all expectations! Oysters, lobster, mussels, clams, razor clams, langoustines and prawns - I think we perhaps emptied the ocean. Having never had oysters or lobster before, I was in for a treat. I can't say the oysters were particularly to my liking (more of a personal preference than anything to do with the chef). The lobster was delicious, fresh and meaty, and although I found it was a lot of effort cracking each part open for a little slither of fish, it was worth the muscle strength! My favourite, however, had to have been the langoustines - probably the freshest, highest quality I have ever tasted!


Although an extremely generous serving, on two huge double plates, it was so delicious that we had no problem finishing it all off!

﻿
But of course, then the desert menu came out and we just couldn't help ourselves, especially after spotting the Torta Bianca - a white chocolate cheesecake, a perfectly crunchy biscuit base with a rich and smooth cream cheese top, served with fresh blueberries and strawberries. 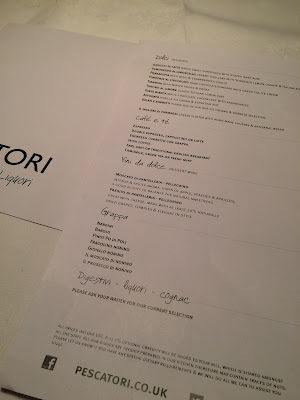 Being quite fussy when it comes to creamy textures, cheesecake to me can often be a hit or a miss - in this case, most definitely a hit.


Admittedly, the restaurant is a little on the pricey side - three courses (excluding drinks) - would cost approx £50+ per person. However, considering the great ambience, deliciously fresh food and attentive service, it's definitely worth splashing out for, and I definitely plan to return. That fish stew is still calling my name!