Breakfast at The Mae Deli, Marylebone


Since it was announced, just before Christmas, that Ella Woodward - better known as 'Deliciously Ella' - would be opening her own health food cafe haven just up the road from where I live in Marylebone, I had been eagerly awaiting its arrival.


With queues out the door for the first few months, I left my visit until things had quietened down slightly. However, even four months after the launch, my friend Sasha and I still had to fight for the last remaining table. Admittedly, it is a small seating area, but with it being so packed on such a sunny morning,  our expectations were high!


As we entered, we were greeted with an amazing selection of healthy, freshly prepared salads, homemade hummus and falafel, alongside 'hot food' and 'fresh drinks' menu board. 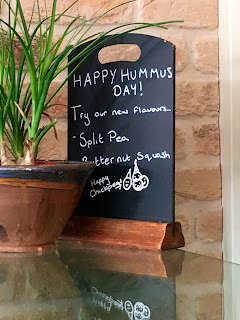 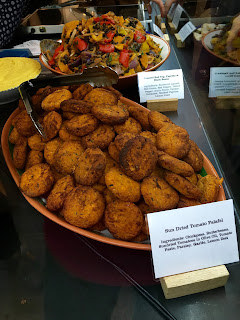 With Ella being a vegan herself, the food at her deli is focused around plant-based dishes featuring seasonal and simple ingredients. With a menu that changes every week, they mix hot dishes, salads and champion all day breakfast options too. Arriving around 11am one Sunday morning, it was the breakfast we were keen to try out!


As those of you who know me will know, I am a HUGE fan of anything based on oats. So, after hearing rave reviews of the ‘All Day Breakfast’ porridge, thick oats slowly simmered in naturally sweet and creamy brown rice milk, served with a choice of toppings, I was super excited to try it out! After waiting in the long queue to place our orders with the waitress (with a couple of people jumping the line - but it was so cramped it was difficult to tell who was there), it was only when I got the till was I told they had sold out!

Sold out of the all day option, just after 11am?!


“Yes, it's popular,” I was told. “At the weekends we tend to run out around this time…. maybe you can try the pancakes?”

A little disappointed (if they sell out often at 11am, why don’t they make more? Or not advertise it as an all day option!?), I proceeded to order the pancakes which, admittedly, did sound lovely. Made with buckwheat flour and coconut oil, and served with a choice of toppings - almond/peanut butter, granola, mixed seeds, maple syrup, raisins, compote, coconut chips and banana slices - I went for the latter three. Beginning to get excited once again about my delicious sounding breakfast, it was only when I saw the waitress transfer ready made pancakes from a tupperware box into a paper bag, and slide them into the toaster, did that pinch of disappointment come again.

Given Ella is so proactive about everything being fresh and homemade, I would have expected my pancakes to have been made to order.

Sasha, meanwhile, went for the Smashed Avocado on Toast, with rocket, chilli and lemon. Again, there was nothing bad about the dish she was served, but with only one slice of the rye bread toast, it just felt a bit lacking.


Her cold pressed Green juice, however, was delicious….but then at £6.95 for a 250ml bottle you would expect it to be so!!


So, whilst there was a delicious looking ‘sweets’ offering, with healthy treats including Pecan Brownies, Cacao and Almond Energy Balls, and The Mae Cake, to be honest, feeling a bit underwhelmed by our main meal we decided to give it a miss. Which was a shame, as that should have been our icing on the cake (excuse the pun).


As anyone who follows my blog will know, very rarely am I one to put a downer on a meal, and maybe we had too high expectations, however the Mae Deli really did fail to live up. Perhaps I'd be speaking differently had I have been able to dig in to my eagerly anticipated porridge bowl but, whilst there wasn’t necessarily anything wrong with Mae Deli, it just seemed to be lacking in effort, and very expensive for what it was.

A salad bowl, for example, will cost £11.10 to eat in, and an extra £4.50 if you want to add a serving of protein, such as marinated chicken and lemon roasted salmon. Coincidentally, as a renowned vegan herself, Ella has received a lot of criticism for serving meat at the deli, however I fully support her decision to keep it on the menu. As she says, not everyone wants to be vegan, and if she wants her deli to succeed she needs to ensure it’s as commercial as possible.


As I say, that I would agree with, but what I would say is that for the deli to succeed, it really needs to be offering something a little more ‘wow', especially with their substantial prices. Between the 'all day' options running out at 11am, the cramped seating, the pre-made pancakes and small portion sizes, although  the actual food tasted nice,  I personally got the feeling that if it wasn’t owned by Ella, there really wouldn’t be nearly as much of a buzz around the place.

Having said that, it IS owned by Ella, who is fantastic at what she does! So, with a few clean ups round the edges, I think the Mae Deli truly does have all the potential to be something spectacular...they just need to sort out the basics! Hopefully I will visit again and write a new post saying how wrong I was!

I'd love to hear if any of you guys have been? What did you think?