Where to Eat in London .... Vegetarian at Tibits, Mayfair

I'ts my second vegetarian post in a row!! As a complete carnivore, it's very unlike me, however after discovering that Vegi food can be just as tasty (if not more!), I decided to visit one of London's Top Vegeterian Restaurant; Tibits in Mayfair. And let's just say my new found love for vegetarian food was furthered!

Recognising the restaurant scene tends to be overflowing with meat yet skimping on veg,  three brothers from Switzerland - Christian, Daniel and Reto Frei - decided they were going to change this, and give not only Vegeterians, but anyone who enjoys good nutrituous food, much more choice, and set about launching a fresh vegeterian buffet, that could be as "speedy as a fast good joint and as cosy as a corner cafe".

And that is where Tibits came about! The concept is simple - fresh, delicious and easy going. With a selection of over 40 homemade vegetarian and vegan salads, hot dishes, juices and deserts, there really is something for everyone.

As we entered, we were greeted by the friendly waiter and shown to our seats. He gave us our card for our 'tab', and explained the concept. It's easy - take a plate, go to the buffet, load it up, then pay at the tills.

Sounds easy - but when we saw the huge selection of delicious food on offer, it certainly wasn't so easy.... we both wanted a bit of everything on our plate!!! 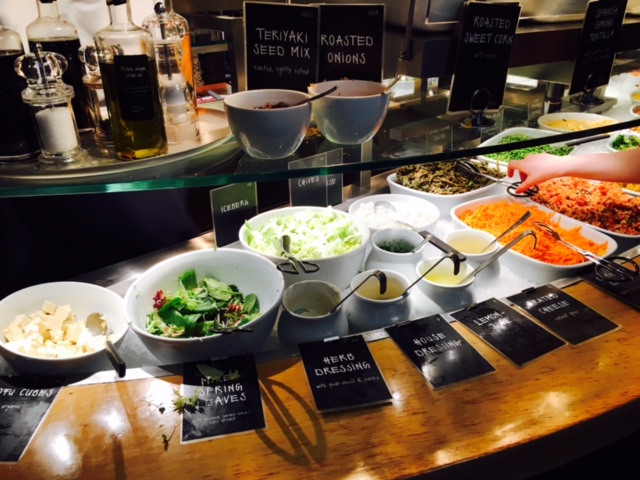 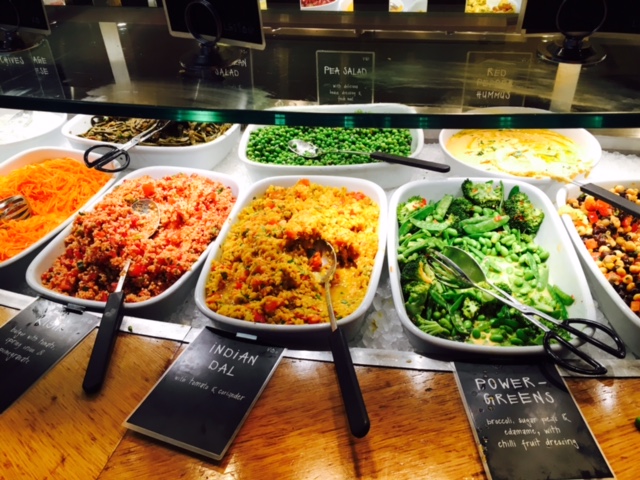 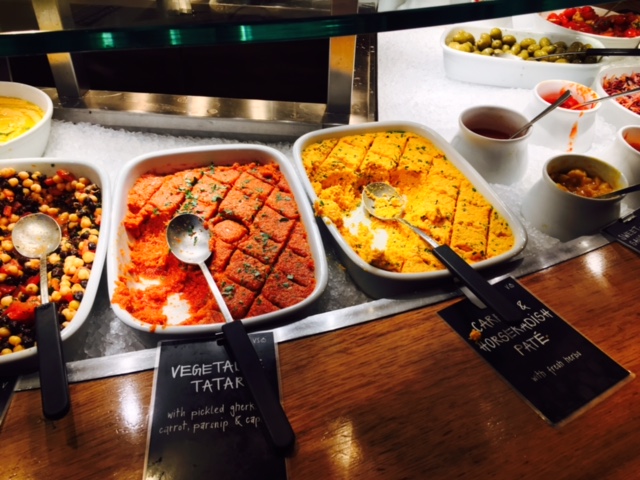 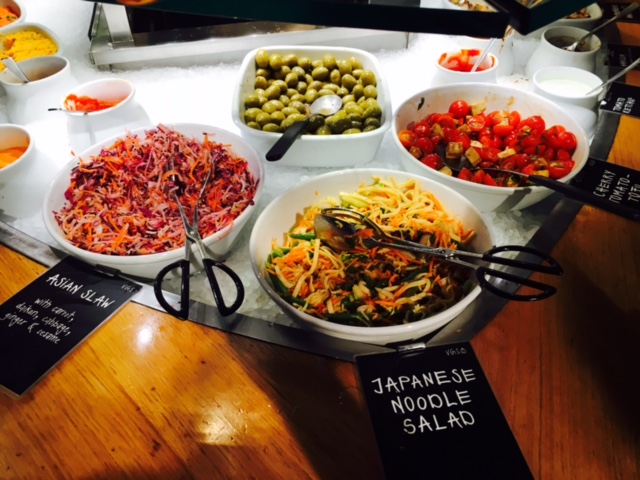 But that's the beauty of the buffet style concept - you really can dig into how much or how little of whatever you want. Hot, cold, salad, soups - you name it! 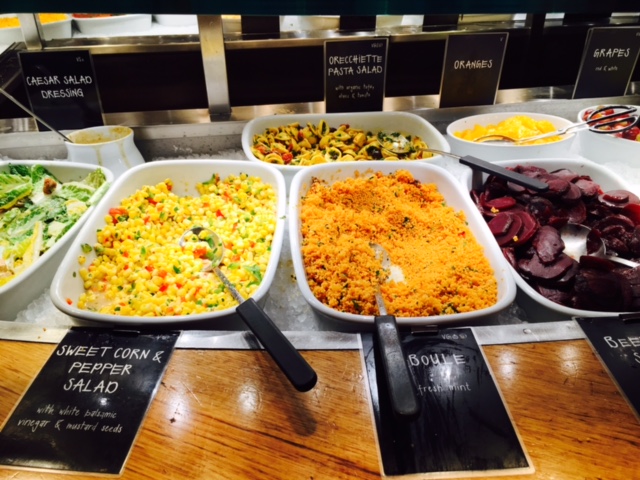 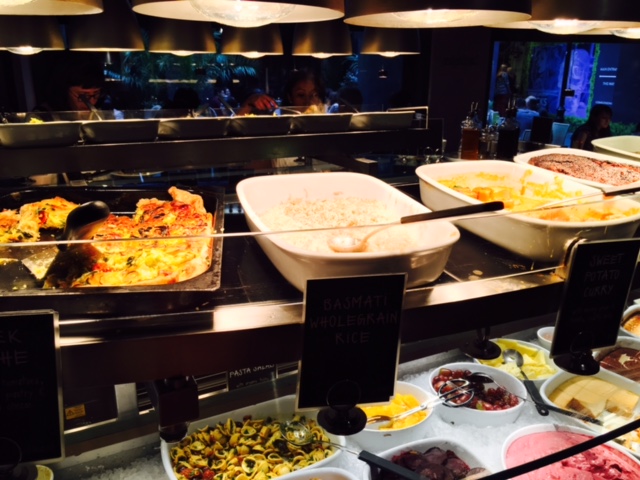 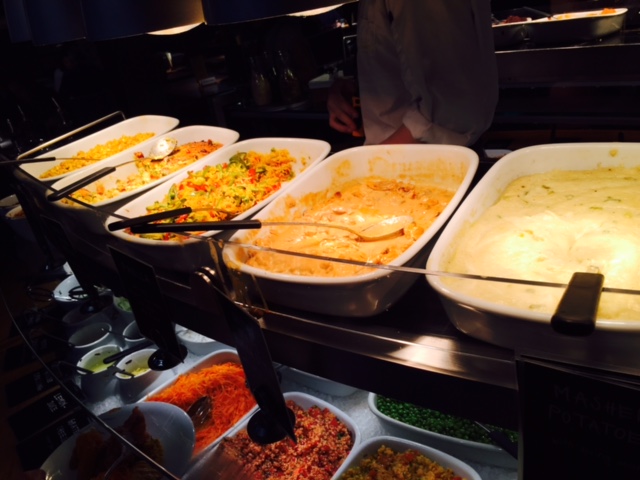 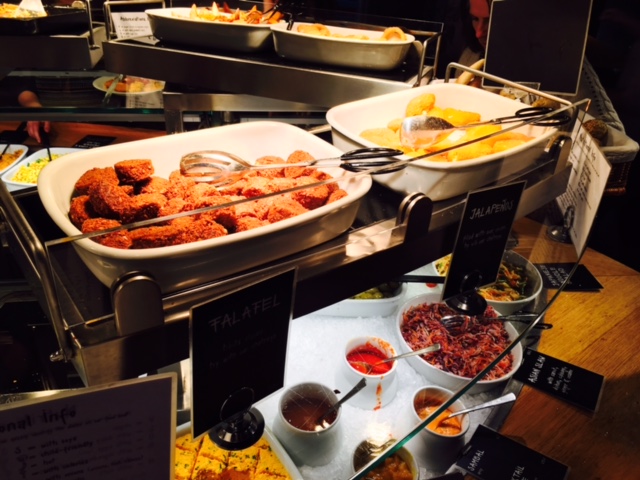 After loading up our plates, we went up to the bar area to order drinks and make our payment. At Tibits, you pay by weight, so you take as much or as little as you want, then put it on the scales at the till and pay accordingly (£2,70 per 100g). I really like this way of doing it as, although I love the concept of a buffet restaurant, often they are 'all you can eat' charged at a fixed price, resulting in them serving low quality food to keep their costs down. But with Tibits, as you genuinely pay for what you eat, you are also genuinely paying for the fresh, healthy and natural produce.

Having said that, my dish did come to slightly more than I had expected....but, as I say, I did go all out....and it was worth it!!! I can't honestly say there was any part of it I didn't enjoy, but the highlights were most definitely the Sweet Potato Curry (creamy, sweet and moist), the lentil dahl (everyones favourite, and not too spicy either) and the Seitan Curry.

Don't worry if you've never heard of Seitan, I hadn't either! Hailed by vegeterians because of its high protein and substantial texture, Seitan is derived from wheat proteins. Tasting very similar to chicken, I would even go as far to say I hardly noticed the difference. If I ever do decide to go vegi (albeit unlikely!), this would definitely be my preference over slimey tofu. Sorry, I'm just not a fan!

Pauline made a slightly more selective selection, with her plate coming to £14.70. Alongside some similar salads to mine, Pauline added in some potato wedges, onion rings and potato croquettes. She also managed to pick up some falafel - which I had somehow managed to miss when delving into the buffet bar!!
But it's not just main dishes- Tibits also offers - wait for it - a buffet desert.... 99% of the populations idea of heaven!! And when we'd had such a nutritious main meal, it would be crazy not to take advantage. With an ever changing menu including raw chocolate avocado torte, wild berry bake, rhubarb apple crumble and panna cotta strawberry compote, although I was a tad disappointed none of these options were on the menu the day we visited, what they did have certainly made up for it! 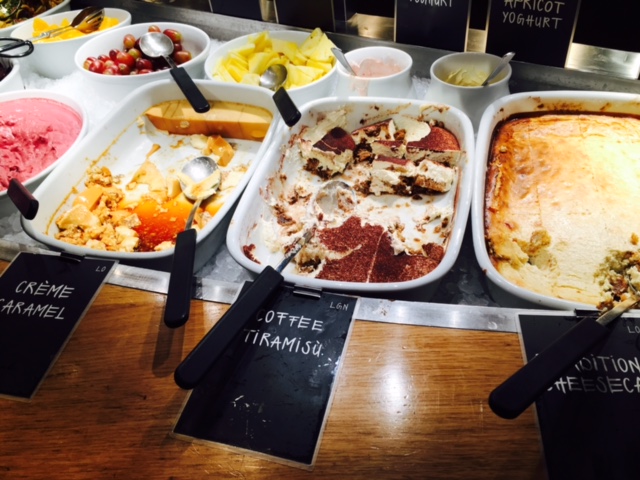 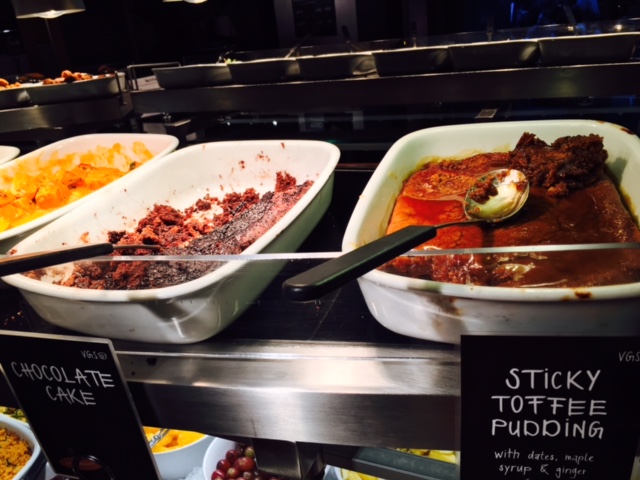 I went for the Sticky Toffee Pudding, Cheesecake, Coffee Tiramisu and a little Granola with Blueberry Yoghurt....just because I could!!

Pauline tucked into the Chocolate Cake, Creme Brulee and, like me, Sticky Toffee Pudding and Cheesecake. I would have said the Cheesecake was probably the winner, but it's actually really hard to choose - which is why Tibits is so great, because you don't have to pick just one!!

All in all, we had a fantastic evening. The food was delicious, fresh, reasonably priced, and extremely tasty.

Thank you Tibits for such a great evening -  I will definitely be back!