Where to Eat in London.... Cereal Killer Cafe!

After spending the afternoon sunbathing in Regents Park, as it reached 6pm the sun slowly began to die down and Joe and I had that awkward dilemma on our hands - not really hungry enough for dinner, but not too sure what else to do.... That is until we remembered Cereal Killer Cafe had recently opened their second branch just up the road in the famous Camden Stables Market.

As we entered, the friendly waitress behind the counter introduced to us to the concept behind the UK's first speciality cereal cafe. "Obsessed with everything cereal", they sell over 120 different types from around the world, which are all displayed behind the counter - everything from classics Lucky Charms and Reeses Puffs, to Peanut Butter Cheerios and Disney Frozen Cereal from the States.

As if this wasn't enough choice, there are then 30 different milks to decide from, including Soya, Almond, Oat, Rice and Coconut, and 20 different toppings - fresh fruit, nuts and sweetie selections (from Reeses pieces to Oreos and peanut butter chips!)

Initially a bit overwhelmed by crazy amount of choice, I couldn't decide which one to go for! That is, until I spotted the pink Disney Princess cereal that they had just got in that day from Germany - it was a no brainer! The lady advised the fresh strawberries as a complimentary topping, which she cut up on top. Anybody who hates soggy cereal as much as I do will understand my delight that they took this into consideration, serving my milk in an old school glass bottle to add when I was ready.

Whilst I went for the pretty pink option, Joe went all out like a child in a sweety shop! Cinnamon Toast Crunch,  topped with Milky Way stars, 100s and 1000s, and toasted marshmallows. The height of a nutritious dinner!

Being taken back to my childhood with all the 90's memorabilia :-) Tony The Tiger, The Troll dolls, Space Invaders, and TV's set in plastic stacking boxes showing all my childhood favourites- how I had missed Johnny Bravo and Sabrina the Teenage Witch!

Honestly, I really am struggling to find any 'worst' part. I suppose you could argue that at the moment The Cereal Killer Cafe is very much a novelty, which may wear off quite quickly. Having said that, their Brick Lane cafe had queues at the door for weeks after it opened, and proved such a success that it lead to this second cafe in Camden - so hopefully the buzz will stick around.

That's the beauty of Cereal Killer Cafe - it's not just breakfast, but also for lunch, dinner, and everything in between. Admittedly it wasn't the most filling of dinners (I did have to grab myself a sandwich later on), so I'd probably recommend it for during the day (going at breakfast time kind of takes the novelty away).

A small bowl of cereal, including your milk, starts from £2.50, which to me seems very reasonable. Having said that, when Cereal Cafe first launched it received a LOT of bad press about how 'overly priced' it was (based on the fact you could buy a full box of cereal for a couple of pound). Which yes, I understand, but - aside from the fact you wouldn't be able to get most of the cereals in the UK at all-  you're not just paying for the cereal - you're paying for the novelty and the experience!  People seem happy enough to pay £2.50 for a teabag and hot water to take away Starbucks - surely Cereal Killer Cafe is better value than that?!

Definitely! With the endless varieties they had, I could go every day for the next few months and still not tick them all off! 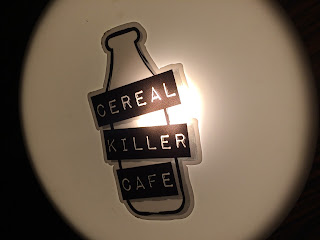 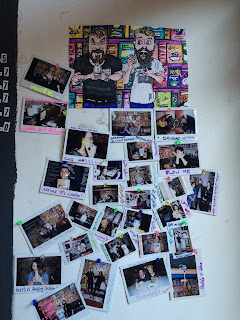