I mentioned in my last post that I'd bought a dress in H&M... but I didn't mention how much of a bargain it was. At £9.99, I couldn't resist. I love the floaty sleeves, something a bit different but it makes wearing it feel very special. Not often you get that for under a tenner! 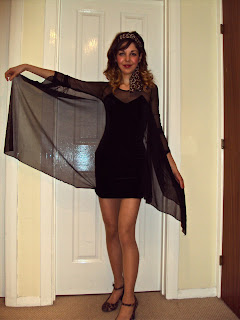 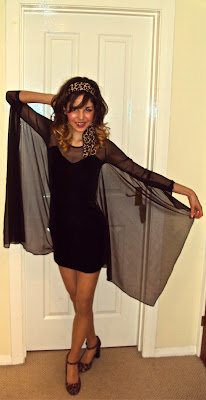 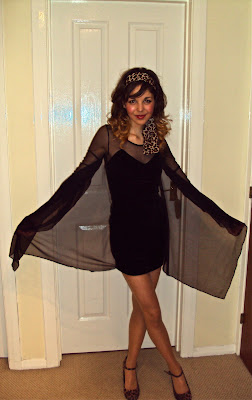 The scarf is an old one from Accessorize - I bought it for my Mums birthday, then remembered she already had one, so kept it for myself. I managed to find some leopard print shoes that I liked, although it wasn't easy!! These ones were actually from M&S - not somewhere I would ever shop (unless its for food) but my flatmate has a really nice pair of boots from there, hence I thought I'd give them a shot. And im glad I did! I love the style, and they're dead comfy too.... although they did send my falling down a flight of stairs (admittedly, the nights alcohol could have been partly to blame for that one!!) 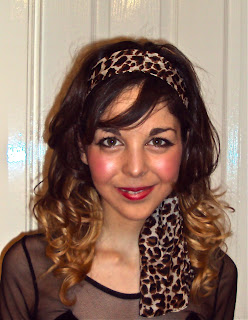 And as I also mentioned (briefly!) last post, I dip dyed! I went to the hairdresser about a month ago to get it done. It was a new hairdresser in Aberdeen (I usually go at home), who told me it would work best if she did it using foils on the lower part of my hair. Two hours later, she revealed the results... very disappointing!! I basically just had highlights on my lower layers, you couldn't even see a difference from my hair before. I know hairdressers never usually do what you ask for, but this was taking it to a new level!
So I decided if I wanted it done right, I'd have to do it myself :P I was a bit scared, but it was actually really easy. If you want to do it yourself then here's how:
- Buy a highlighting kit. I bought one by Jerome Russell for £5.61 from Boots... not bad considering getting it done at the hairdressers is a good £90.... and they don't even do it right! You have to make sure you get a highlighting kit though, an ordinary blonde hair dye wont work as it needs to have the bleach in it.
- Test a bit of hair with the dye to see how long you should leave it on for. Put a small bit on the end of your hair, and wipe it off after 15 minutes. Reapply and repeat, until you get the desired colour. The longer you leave it on for, the blonder it goes.
- The pack said you could leave it from 30-90 minutes. The maximum length of time mine was on for was an hour, which I'd say was more than enough, as it's slightly blonder than I had hoped!
- First you want to apply the dye to the very ends of the hair. Leave this for about a third of your total application time (in my case, 20 mins). Then apply more slightly above it, and leave for another third of total application time. Do this one more, above where you applied it last time. This means the colour will look as though it fades more gradually into your hair.
- Wash it out and dry your hair. At this point, I noticed some bits were quite uneven, so I went back and put more dye on. Was a bit of a pain, as I had to go through the hassle of washing it all again, but I would say it's definitely worth it while you have all the stuff there anyway.
I am looking for a good styling product now, a beach hair/salt-spray type thing. Anyone got any recommendations?? I've heard Bumble and Bumble do a good one, but I recently tried their "Hair undressing" cream and was quite disappointed! Let me know :-)